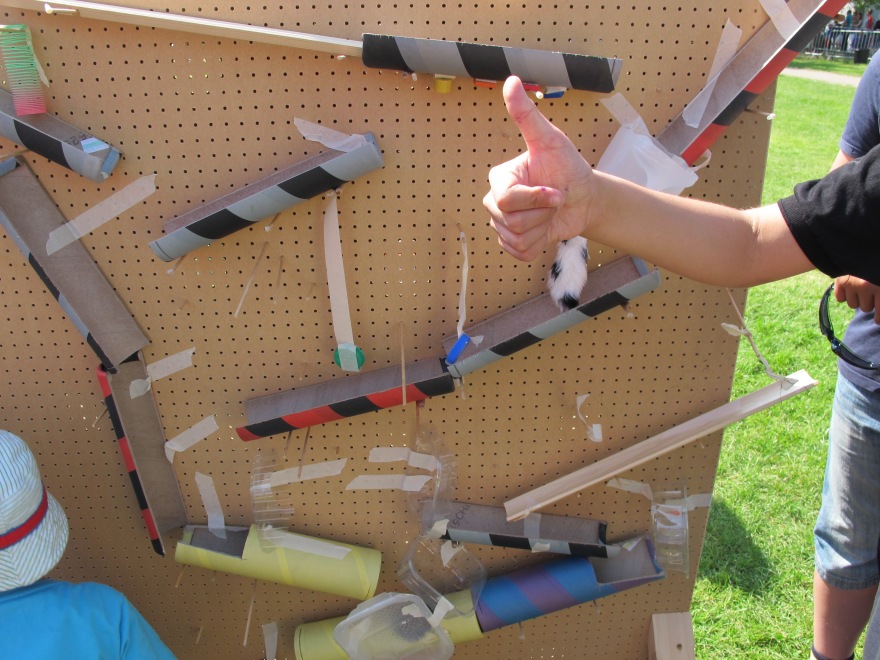 Earlier this year Roma Patel and Louisa Penfold were approached by the Lakeside Arts Centre to develop a children’s creative play environment that embodied the theme of ‘invention’ as part of the annual Wheee! International Children’s Theatre and Dance Festival (June 4 & 5 2016). We were interested in constructing a space that people of all ages could explore through collaboratively making and playing. The parameters of the family festival required us to design an activity that could be accessed at multiple levels of complexity and therefore relatively open-ended in nature.

The idea of building a Ball Run Factory came to us after seeing the work of the Tinkering Studio and makerspaces that design creative activities for children at the intersection of art, science and technology. We also thought it could be a fun to explore the concept of a ‘creative factory’ in Nottingham with the strong industrial history of the East Midlands. We were particularly interested in exploring these ideas with an early years and art-based framework.

In our practice as artists, and within our PhD research, Roma and I have both been drawn to Simon Nicholson’s theory of ‘loose parts’ [1] in which artists and architects construct a creative environment which includes an assortment of materials which can be used, transformed and manipulated in a large variety of ways.

Ball Run Factory was split into two parts. The first was a dedicated area for babies and toddlers featuring a cardboard ‘factory’ with tubes and plastic pipes extending out of it. The pipes and tubing were designed in such a way that children and their parents could move them and roll different balls down, allowing for the space to become a place of continuous transformation. The second area of The Factory was a much larger space where older children could use recycled and quirky materials such as cardboard tubes, plumbing pipes and wooden tracks to design and construct ball runs. We wanted the activity to be intuitive so that when children walked into the space they could have a look at the demo model and what other children were doing and immediately understand the essence and possibilities of the activity with little verbal instruction required.

In the weeks leading up to the Children’s Festival Roma and I collected an array of materials from our recycling bins, charity stores, discount shops, Roma’s daughter’s toy box and the Scrapstore in Nottingham. We also got our friends, family and colleagues to collect materials from home such as cardboard rolls, plastic food containers and cardboard boxes. This allowed us to accumulate a large amount of materials in a short period of time and within our limited budget.

Over the festival weekend we were amazed to see the large variety of ways in which children appropriated the materials. The simplicity and limitless possibilities of the materials and objects seemed to trigger children’s imaginations (pictured below):

We also loved observing the ways in which people’s creations provoked even more eccentric and creative responses from others. For example, on numerous occasions we observed a family complete their ball run and leave the space. Another family would then enter the space and start adding and changing the previous family’s run to make new constructions. The focus of the space was not on the creation of a particular physical thing but rather for children to explore the creative process, develop their own learning strategies and collaborative practice alongside their peers and adults.

It was fantastic to observe how children creatively problem solved the unexpected glitches in their runs. For example, many children experienced the issue of the balls being too bouncy and discovered that placing soft materials and fabrics along parts of the runs created enough friction to slow down the ball and prevent it from bouncing off.

After the festival, Roma and I met again to watch over the visual documentation we took of the children. We used video and photography to critically reflect upon our initial intentions and how children’s appropriation of the materials reaffirmed or challenged these notions. Whilst reviewing the footage, we talked about how the children used the space in unexpected ways. For example, the baby and toddler area featured three different sized balls and three different sized pipes. The toddlers in particular spent a lot of time investigating which balls went down various pipes. When we were making the initial selection of the balls, we did so based on their sensory qualities (i.e. one had bells inside and made jingly noises, another was soft and squishy and the third had soft plastic spikes) and did not really consider their size. In out next iteration of Ball Run Factory, whenever that may be, we would like to explore this idea further to see what other sized pipes and balls could be included.

Roma Patel is a scenographer currently undertaking her PhD at the Horizon Research Institute and is based in the Mixed Reality Lab at the University of Nottingham.

Louisa Penfold is a children’s curator currently undertaking a PhD in the School of Education at the University of Nottingham in partnership with Tate (United Kingdom). Her research is investigating the construction of child-centred practice in early year’s immersive environments in art galleries. Louisa blogs on creative environments for children in art galleries.

The idea of a ‘marble run’ has been explored by many scientists, artists, engineers and children. Here are some links to help create and inspire making your own runs at home or at school:

The Tinkering Studio at The Exploratorium

Instructions for how to build the wooden frame of a ball run:

Rube was an American cartoonist who drew cartoons of crazy contraptions that perform simple tasks in very complicated ways. His pictures have inspired many people to create their own contraptions, including these:

This popular Japanese TV show always starts with a Rube Goldberg-inspired contraption. Here is a sample:

‘Raceways: Having Fun with Balls and Tracks’ by Bernie Zubrowski is a great introduction to marble runs and track making: